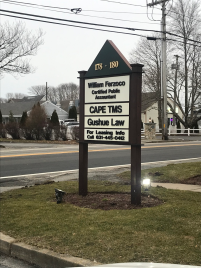 eFAX for all locations

Click the link below for news about recent legal decisions and other information that may be of interest to you.

If you have a legal question or need legal representation, please use our contact form to submit a question or request further information.

All legal fees for any client engaged through this website shall be discounted by 10% from the usual rates at the time of engagement.  Both hourly rates and contingent fee percentage rates will be reduced by 10%.

The discount does not apply to expenses and experts.

Check back regularly to stay informed of recent decisions and and other information that may be of interest to you, including news of recent Gushue Law cases and activities.

The failure of a neighbor's substandard household septic system resulted in the condemnation of the client's lakeside dwelling by the local Health Department.  Subsurface seepage of sewage liquid into the basement caused substantial damage to the dwelling and its contents, and rendered it uninhabitable.   No meanigful attempts to stop the seepage or remediate the damage had been made by the neighbor or his insurer until after    Gushue Law was retained, 14 months after the seepage was first discovered.  After instituting litigation against the neighbor and his insurer on claims of nuisance, trespass, negligence and bad faith insurance settlement practices, settlements were reached as to (1) real and personal property damages, including remediation and repair of the dwelling, and compensation for lost contents, relocation and rent expenses, and out-of-pocket losses; and (2) nuisance and personal injury damages, including lost rental value, emotional distress and physical illness.  Remaining bad faith claims against the insurer are still being litigated.

In the latest and, hopefully, final chapter of a more than 25-year battle with watch-dogging neighboring waterfront property owners, Gushue Law obtained a comprehensive decision and Judgment of no liability on nuisance and restoration claims seeking over $600,000 in damages plus beach restoration work. Even the infamous Hatfield-McCoy feud lasted only 13 years.  In this case, after a complex process of discovery and trial involving experts in chapter 91 licensing, engineering, surveying, coastal geology, aerial photo interpretation, storm and wind data analysis, climate change, sea level rise, and property appraisal,  and after numerous related administrative proceedings and appeals,  the old adage that you can't beat Mother Nature (and you can't blame your neighbor for the erosion of your waterfront property) prevailed.  The complaining neighbor was unable to prove that any actions or use by Gushue Law's clients interfered with or caused any damage to the neighbors' property.  The evidence gathered also revealed numerous unpermitted wetland-area alterations had been made on the complaining neighbors' property over the years.

The Planning Board in this case improperly denied a property owner’s plan to develop new house lots in an exclusive residential area accessed by a 2,000-foot long private way.  The Planning Board improprerly an approval not required (ANR) plan under the subdivision control law, claiming that “vital access was not provided to the lots, and the private way did not have sufficient width or grades, or adequate construction.” Gushue Law appealed the Planning Board decision to the Massachusetts Land Court, which after a trial, reversed the Planning Board’s decision, and ordered the Board to endorse the plan.  The Town then appealed the Land Court’s ruling to Massachusetts Appeals Court. The Appeals Court agreed with Gushue Law’s position, and affirmed the Land Court’s decision.  The project development proceeded and is now an exclusive, gated residential community in a picturesque hillside location between Boston and Worcester surrounded by hundreds of acres of conservation land.

$1,135,000 Obtained After Judgment Against Decedent’s Trust in Promissory Note Case

Gushue Law obtained a Judgment, affirmed on appeal to the Massachusetts Appeals Court, for more than $937,000 against an irrevocable trust in a case involving an unsecured personal loan made to the trust’s grantor, who then died before the loan was repaid.  The successor trustee of the trust, into which all of the deceased grantor’s assets had been transferred, denied liability for repayment of the loan.  In a summary judgment ruling, the Court agreed with Gushue Law and ordered the trust to repay the loan with interest, plus legal fees and costs, and a total of over $1.13 million was collected.

After a lengthy arbitration hearing, Gushue Law obtained a $1.42M arbitration award for breach of a construction contract. The general contractor failed to provide adequate site storm water management, which resulted in extensive damage to the job-site and adjacent wetlands, and significant environmental fines, then abandoned the job. A replacement contractor was hired to correct the damage and complete the project. The defendant blamed the site design engineer, the weather and God for causing the damage. The Arbitrator found that the contractor had negligently failed to perform the work in accordance with the contract and good construction practices and environmental protection requirements.

Mass. General Laws Chapter 21E is the state counterpart of the federal “Superfund” law.  Both statutes require the cleanup of contaminated properties, and impose a wide net of retroactive and strict liability, with limited defenses and exceptions, for the costs of cleanup.  The federal law excludes petroleum spills and leaks (oils, gasoline, etc.), however Chapter 21E requires remediation of oil contamination and imposes strict liability (1) if you are the current owner or operator of the site of the spill or leak; or (2) if you otherwise caused or are legally responsible for the spill or leak.

In this case, Gushue Law's client had acquired an industrial property in the 1990s, then performed required cleanup work before selling it to developers 6 years later.  The client did no further business relating to the property, and had no assets and no income from it.  Unfortunately, nearly 7 years after the sale, oil contamination was discovered on a neighboring property, and the Massachsusetts DEP sought to hold the long-gone former owner responsible.  To avoid expensive engineering costs and annual Chapter 21E fees, Gushue Law guided the client in seeking Financial Inability status from DEP, which was approved.  Subesquently Gushue Law successfully argued that as a former owner who did not store or dispose of oil or hazardous material at its former site, and who did not cause any oil releases on its site,  its client is not a liable party under Chapter 21E.   The DEP agreed and is pursuing the  proper parties, i.e., the current owners, as the responsible parties for the oil leak.

Gushue Law obtained a $155,000 Judgment against a private landlord and a separate $54,000 Judgment against the Housing Authority due to mold contamination in an apartment leased under a HUD Section 8 Housing Assistance Payments Contract. For several months the premises were in violation of state and local building and sanitation codes, and neither the landlord nor the housing authority responded to the tenant’s repeated complaints of water and mold problems in the apartment. A mold inspection confirmed dangerously high levels of mold in the dwelling, and upon being informed of the tenant’s mold inspection results, the housing authority ordered the tenant to vacate the premises. The tenant was forced to leave essentially all personal property and belongings behind. Gushue Law also brought and settled a claim against the tenant’s insurer, who had denied coverage despite an endorsement affording coverage for mold damage in the tenant’s policy. The settlement amount exceeded the liability limit of the policy.

In this environmental enforcement case, the Massachusetts Attorney General, for the Massachusetts Department of Environmental Protection, sued several Defendants, including Gushue Law's client, a construction contractor, for multiple alleged violations of laws and regulations in connection with a large construction project.   The allegations included wetlands alterations and filling, and unpermitted processing and disposal of construction waste and debris, including asbestos-containing material, in violation of the Wetlands Protection Act, the Clean Waters Act,  the Solid Waste Disposal Act, and the Massachusetts Air Act.  The complaint sought substantial civil penalties and injunctive relief requiring extensive and expensive testing, assessment, and remediation of the construction site, the nature and costs of which were unknown at the time, but which were estimated to be several hundred thousand dollars.  Gushue Law's expertise and credibility enabled the successful and speedy negotiation of a settlement for its client which resolved all claims without any admission of liability and without any injunctive relief or requirement to participate with the site owners in the testing, assessment, and remediation of the site.

Gushue Law obtained a $95,000 settlement from a builder and real estate broker after water was discovered seeping into the finished basement of a newly-built $275,000 home in New Bedford.  Investigations revealed that the builder had failed to install a basement and foundation underdrain system that had been specified by the builder’s civil engineer for the home due to poor soil conditions.   Excessive cracking occurred on all sides of the concrete foundation walls, causing cracking of walls and ceilings, and chronic groundwater water seepage into basement resulted in mold infestation of the dwelling.  Improper lawn grading added to the problem.

In a case accepted from the Boston Bar Association Lawyer Referral Service,  Gushue Law obtained a jury verdict of $144,000 for homeowners after a 10-day trial in New Bedford. The jury found they were defrauded by John L. Santos, a Fall River builder, David Alves, a New Bedford real estate broker, who was also a City Councillor, for failing to disclose knowledge of a 7,600-gallon underground heating oil tank on the former public school property. The jury also found the City of New Bedford liable under the state  hazardous waste law (Chapter 21E).   Santos and Alves were also found to have wilfully and knowingly violated the Massachusetts Consumer Protection Act (Chapter 93A), and were each ordered to pay an additional $41,000 in compensatory and punitive damages and to pay over $110,000 in attorneys' fees and costs.

Gushue Law obtained a settlement of $150,000 was negotiated for an 82-year woman who suffered hip and back injuries in a fall down stairs in a Dentist's office.  Liability was predicated upon the maintenance of an unreasonably safe condition by having an office entry door open onto a small landing carpeted with the same herringbone-pattern as the stairs and the waiting room floor.

An unusual settlement was obtained by Gushue Law for an elderly couple whose home was contaminated as a result of gasoline tank release from municipal property.  The settlement included $100,000 in money damages plus property improvements, including water- and vapor-proofing of the basement of the dwelling, and replacement of a paved driveway damaged during environmental assessment activities.  In addition, a first-refusal provision with the municipality was negotiated, which guaranteed that the future market value of the property would be within 10% of the current value.  The case involved a situation where the municipality had initiated response actions under Chapter 21E to prevent groundwater contamination from reaching the residence, then terminated the response actions without any engineering or regulatory approval.

In this case, a settlement of $162,500 was obtained through private mediation for a 54 year old victim of a boating accident.  Under Massachusetts law, a boat owner’s duty to his guests (invitees) is to exercise that degree of care that a reasonably prudent boat owner would exercise under similar circumstances. In this case, the boat owner’s actions caused the plaintiff to fall backwards, striking a rigid metal support rod with her coccyx. The resulting injuries included pervasive abdominal-perineal and lumbar pain, sciatica, impaired bowel and urinary function, anxiety and depression.  She was subsequently diagnosed as having a post-traumatic neuropathic pain syndrome, referred to as chronic regional pain syndrome (CRPS), due to a sacral plexus injury suffered in the fall.  No fracture, dislocation or other specific injury from the fall was found in extensive diagnostic testing, and both the liability claims and the extent of the injuries were vigorously denied by the insurer.

Serving clients throughout eastern Massachusetts and Cape Cod & the Islands.